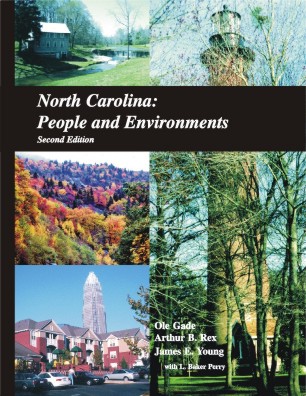 Volume is out-of-print, but has been posted in its entirety to these web pages. Subsequently analytical and data updates will be posted as results from the US 2010 Census progresses, and impacts of the current prolonged economic difficulties are assessed. In effect this effort will eventually provide a 3rd edition of this work.

You will need Adobe Reader in order to open these files, this software can be downloaded at this link.

BOONE—Parkway Publishers, Inc. is pleased to announce the publication of North Carolina: People and Environments, a comprehensively cross-referenced resource of current conditions, issues and problems of life and livelihood in North Carolina, its regions and its communities.

North Carolina: People and Environments, written by three geography professors from Appalachian State University, takes a broadly holistic view of the state and its geography. It describes how North Carolina’s natural and human resources interact in complex ways to form the modern state of North Carolina. The book makes an extensive use of the latest 2000 census data.

Major sections of the volume emphasize the following characteristics and issues:

North Carolina’s varied landscape, its natural resources (i.e. minerals, soils and abundant forests), relates to a geological evolution going back at least 1800 million years, and to a climate that has varied from arctic to tropical rainforest over time. Geologic upheavals and climate change have shaped the land and given its regions unique characteristics.

A not always benign North Carolina physical geography, considering the state’s mid-latitude position on the earth’s surface, its physical proximity to the Atlantic Ocean and an expansive continental interior, as well as its formidable mountain backbone, harbors the potential for devastating hurricanes, tornadoes, snow storms, and alternating years of excessive flooding and drought conditions.

On its human side North Carolina’s geography is, in fact, even more interesting. The state has been settled by a mosaic of people starting with the Native Americans to the ongoing in-migration of Hispanic people, and large numbers of retirees. The recently much improved economic conditions reversed the brain drain suffered during the early part of the 20th Century. A resulting explosion of population led to the development of the state’s “Main Street”, a 21-county megalopolis along the I-85 and I-40 interstates, stretching from Charlotte to Raleigh to Fayetteville. This critical growth ‘horseshoe’ is having an immense impact on the state’s economy, and therefore on its delivery of services, such as education, health care, and the quality of life, while furthering the urban-rural divide. The state’s laissez faire economic approach has unleashed an entrepreneurial spirit that has placed the state in the top tier of national attractiveness in economic investment. Meanwhile, the state’s environmental green heart is being severely eroded.

For much of 20th century, North Carolina depended on extractive industries such as agriculture and forestry. More recently agri-business, like the hog industry, has become dominant, though not without serious negative environmental impacts. Meanwhile, the tobacco industry is crippled by medical concerns, and by their manufacturing shift to overseas locations. Family farms, the mainstay of earlier centuries, are being replaced by corporate farms with their emphasis on a low cost labor force, much of which is made up of Latino migrants.

North Carolina traditionally depended on the manufacturing industries such as textiles and furniture making. At one time, North Carolina employed the largest percentage of its people in manufacturing, among the states of the Union. This has affected North Carolina in a myriad ways—politics, race relations, wages, unionization, and road building.

Globalization of trade has impacted North Carolina. The state has lost much of its textile and apparel industries. It is seeing a replacement of these with service and high technology industries. One immediate result of this shift is the replacement of better-paying blue collar jobs by low-wage service jobs. On the positive side there is continuing expansion of knowledge and high tech industries, as well as impressive growth of the financial and medical sectors of employment.

The largest chapter of North Carolina: People and Environments deals with the state’s “social capital.” Social capital encompasses education, health care, social welfare, safety of persons and property, and quality of life. There are issues of major concern in this area, as, for example, the growing income differential between rural and urban areas, with poorer counties subjected to much higher property tax rates for local school support. Also, the state persistently exhibits some of the highest rates of infant mortality and sexually transmitted disease in the country. Meanwhile higher education, sparked by the 16 campus public university system, supplemented by an array of significant private institutions, and further buttressed by a 59 campus community college system, is highly esteemed in the country and abroad.

Among the text’s most critical contribution is the five well illustrated chapters, close to fifty percent of its pages, devoted to detailed descriptions and evaluations of North Carolina’s primary regions, their counties, communities, and neighborhoods. North Carolina’s physical geography contributes to dividing the state into four regions—Mountain, Piedmont, Coastal Plain, and Tidewater. Each region is here defined in terms of its settlement history, the uniqueness of its physical environment, and the impacts of people and development on natural environments. For instance, the more vulnerable the environment the more attractive it appears to be for development and higher the value to developers and consumers. Superimposed on these primary regions is the regional diversity of thirteen geographic regions, defined by economy and cultural history, and richly illustrated by black and white and color photography.

North Carolina: People and Environments contains well over 800 illustrations, from detailed maps to tables, charts, and color photographs which help demonstrate the issues facing the state, such as the urban sprawl devouring the Piedmont landscape, the flooding of the Coastal Plain, the speculative devouring of coastal and mountain environments, but also the hopes the authors’ place in new urban environments, in the preservation of the state’s visible history, and, increasingly, in conservation of the more fragile physical environments.

North Carolina: People and Environments (2nd Ed.) is a valuable resource for anyone who seeks a perspective of issues affecting North Carolina now and in the future be they teachers, planners, corporate leaders, business people, state and local decision makers, students, and citizens in general.